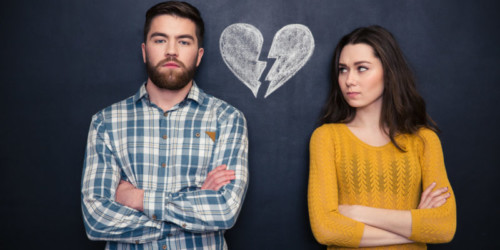 "It is better to accept responsibility in the part that you, as a member of the marriage or relationship, played in its end than to continue the toxic trends of shifting blame through name-calling."

It is sometimes easier to put someone down and enlarge their faults than to admit that you were partially to blame for a situation. Whether this is in the context of work, friendship, relationships, or marriage itself, it can be an easier to admit you made a mistake in the initial forming of a bond or relationship than admitting that you had anything to do with it ending.

During a divorce, it can be easy to paint your soon-to-be ex-spouse as the bad guy, and in many cases, such as when criminal behavior, abuse of any sort, addiction, or neglect are present, that may very well be the case.

When the marriage begins to come to a close, many create ways of dealing with the situation, in order to justify divorce, because they feel like the act of divorce is an action needing justification. Many dive into their work and try and find ways to spend their time, so they do not have to think about the end of the relationship or the divorce.

Others look to demonize the soon-to-be ex-spouse by enlarging their faults or labeling them as ‘crazy’.

At one time or another, most of us have been called ‘crazy,’ in some form or another. Whether it was meant as a serious insult or a passing hyperbolic joke, it can occur, and we, as individuals, may not realize it or realize how it can affect someone.

Part of the issue stems from a lack of understanding of what the word actually means. Whether you’re referring to the classical Merriam-Webster definition that involves having an abnormal or sick state of mind without regard to reason or reality, or the Gnarls Barkley song, everyone has their own thoughts on what the concept entails.

For many going through a divorce, this concept is full of blame. By calling a soon-to-be ex-spouse ‘crazy,’ they are stating that their mental state deserves part of the blame for the end of the relationship.

However, there are many in healthy relationships and many who have exited unhealthy relationships that feel that any type of behavior that may be conceivably classified as ‘crazy’ was brought on because of the relationship itself. The dynamic between the two individuals is what is thought to have sparked irrationality.

This type of notion has been studied extensively, and according to Psychology Today, the notion that love can make you crazy comes from what occurs in the beginning stages of many relationships.

In the beginning of relationships, many can find themselves losing touch with reality and have issues distinguishing fact from fiction. They do not always exhibit the best judgement, which means that decisions being made are being based on inaccurate assessments of what is going on in their relationship.

When you call an ex, of any kind, crazy, you are giving them power. You are telling the world that you misjudged this situation and that your thoughts and feelings in the world of romance are not as trustworthy as you previously thought.

In dismissing their mental capacity to sustain a relationship, you are condemning your own decision-making capabilities in the court of public opinion.

Communication is often cited as the prime example of what determines ‘crazy’ behavior in relationships and how communication can cause individuals to behave irrationally. Texting and social media messaging have made people think that everyone is always accessible all of the time, causing any time that passes before a response to be thoroughly analyzed. The misjudged feelings and miscommunication that unavailability can create has been known to cause people to act outside of rationality, allowing fear and anxiety to control behavior.

This is a textbook example of what individuals describe as ‘crazy,’ when referring to an ex-spouse or an ex-partner. They see their behavior as unjustified and themselves as blameless in this situation. They distance themselves from the responsibility of being in a relationship and take no ownership in its outcome. Those that are quick to label often are not able to see from the other person’s perspective. They feel that they would not have reacted this way if the roles were reversed or the behavior may not make sense to you.

According to Psychology Today, the behavior being seen as odd or ‘crazy’ is due to a disconnect from the way you do things and what you understand to be true. The truth is that all human beings experience levels of ‘crazy’ at one point or another and behave in less than optimal ways once in a while. To throw around the label of ‘crazy’ is to discount those who actually suffer from the stigma of mental illness.

With close to 20 percent of the American adult population clinically diagnosed as mentally ill on some level, it is not fair to use the stigmatic language of ‘crazy’ just because you did not have an amicable end to a relationship or marriage.

Many divorces fail to be amicable and civil, but throwing around the word ‘crazy’ to describe an ex-spouse who may be a co-parent to your child is not accomplishing anything constructive for anyone.

In making yourself feel better by painting your ex-spouse in a worse light, you are taking functionality out of the equation of whether or not the relationship was sustainable. Interpersonal dynamics are not an exact science that dictates that specific types of people will always stay together or will always combust, and behavior and how we perceive it is about as subjective as you can get. In determining that an ex-spouse is ‘crazy,’ is ignoring how you may have behaved during the time that you were together.

It is understandable to want to negatively label an individual claiming half of your assets, claiming custody of your children, and requiring you to pay alimony and child support on a regular basis, but given the rationality that it takes to end a marriage, it is unfitting to dismiss your role in the end of a relationship, by ascribing the label of ‘crazy’ to an ex-spouse.

By doing so, you also are dismissing the severity of the challenges that individuals with mental illness face. It is better to accept responsibility in the part that you, as a member of the marriage or relationship, played in its end than to continue the toxic trends of shifting blame through name-calling.