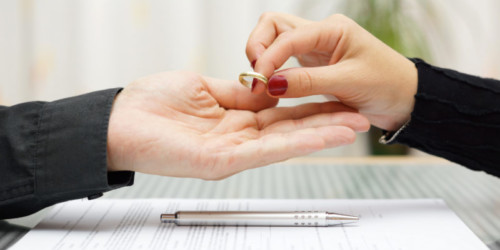 For individuals going through a divorce, there are many assets in question worth a pretty penny. During the divorce process, assets can find themselves in the center of the argument, giving ample ammo for soon-to-be ex-spouses to fight about.

One asset that is often overlooked by men in the middle of the process is the wedding and engagement rings; a coincidence, given that they know the most about their monetary value.

When a person seeks to buy an engagement ring, the old adage is to spend two months salary. However, much of the societal expectation surrounding engagement rings stems from the DeBeers Diamond Corporation ad campaign from 1938, which said that the only way for a “real man” to show his love was to buy an expensive diamond ring, according to TruTV’s “Adam Ruins Everything”.

The expectation continued to devolve. The DeBeers Diamond Corporation later included the idea that you needed to spend two months salary on the ring, due to the fact that company profits were down. Due to the high demand and increased market year after year, many individuals who purchase engagement rings are under the impression that worst comes to worst, the diamond itself is worth enough to resell, and that is partially true.

However, the only reason that is true is because the DeBeers Diamond Corporation has a global monopoly on diamond mining and artificial restrict the supply, in an effort to increase the prices of the diamonds themselves. This was detailed in The Independent’s article where DeBeers Chairman Nicky Oppenheimer stated that diamonds are intrinsically worthless.

Because of the artificial market being created, it can make the engagement ring industry appear to be shallow and make your engagement and wedding ring appear to not worth fighting for during the divorce process. However, it is that very artificial market and the societal perception of the value of diamonds and rings that create their monetary value, making them a sought after asset.

The societal perception of the worth of the ring and decades of advertising has cemented the need for a diamond ring as a part of the many traditions that a wedding includes. During a divorce, it can be difficult for a soon-to-be ex-husband to get the ring back.

According to Avvo, most states in the United States rule that the wedding ring is an absolute gift. Once given, it becomes the property of the spouse, giving that spouse the ability to do with it as they choose.

Some states view an upgrade of that ring to also be an outright gift. Other states think of it differently, given that it was purchased with marital funds. This gray area can make it marital property, if properly explored through state law.

Those who still are engaged and have yet to say ‘I do’ actually have a stronger case in many states. According to The Virginian Pilot, the Virginia Supreme Court stated that the purchaser of an engagement ring gets to keep the ring when marriage plans end, because in the state of Virginia, those diamonds are considered conditional gifts.

Similarly, in the state of California, the courts look at the ring as a promise of marriage, according to The Huffington Post. If the spouse receiving the ring upholds their end and marries the individual offering the ring, it is theirs, free and clear. However, if they never get to the alter, the receiver must return the ring, because they never delivered their part in the bargain.

The majority rule in the determination process in these states has a lot to do with who is at fault, in terms of the reasoning of breaking off the engagement in the first place. For example, if one spouse commits infidelity, the opposite spouse keeps the ring. The minority rule discredits the fault in the breakup and view the ring as a conditional gift. Since the condition of marriage was not kept, the donor is entitled to a return of the ring, regardless of fault.

Sometimes, the desire for the ring has nothing to do with the monetary value of the band or the diamonds. Wading through the difficult waters of a ring’s sentimental value can sometimes be more difficult than establishing legal claim to the property. There are cases where spouses choose to exchange their own rings with one another. There are cases where one spouse melts down the ring, utilizing the expensive metals for whatever they want. There are even cases where a spouse gets the ring back and wears on a chain as a necklace.

In splitting assets, many couples may look to sell the ring and split the value of it amongst themselves. Given the monetary value of the asset and its use in the context of a marriage, it makes sense to attempt to get as much as possible for it. Additionally, the ring and diamond are sought after items, so it would make sense to split the profits, in order to avoid any unnecessary fighting during a difficult process.